Growing up in a small town in western Georgia, Nick Foster spent his early life connected to the natural habitat surrounding him. Now an alumnus of the Environmental Studies Program in the Dornsife College of Letters, Arts and Sciences, he recently followed his passion for the environment across the North Pacific Ocean. The nautical voyage, hosted by the Ocean Exploration Trust, was a part of a global effort to map the entirety of our world’s oceans. 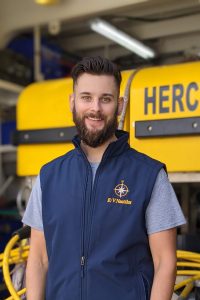 Foster graduated from high school knowing that he wanted to pursue higher education, but he wasn’t quite sure what to study. He joined the Marine Corps and was stationed in Hawaii, where he developed an affinity for ocean science. Above all, his connection with the community near his base, and the community’s connection with the ocean, affirmed his admiration for the deep blue. “Everybody there is so intertwined with the ocean. How could you not be on an island? So being in this environment really just furthered my love of the ocean,” Foster says.

After spending several years on the Island, Foster returned to the U.S. mainland to further his education. He planned to fund his studies through the G.I. Bill but discovered that it caps tuition coverage at $25,000 per year for private schools. USC’s participation in the Yellow Ribbon Program, which waives tuition not covered by the G.I. Bill, made the university affordable for Foster. In 2017, he enrolled as an undergraduate major in the Environmental Studies Program (ENST), with a minor in Geographic Information Systems and Sustainability Sciences.

ENST proved the perfect home for a curious, ambitious student like Foster. “While I was an undergrad, I would do anything I could to get out there and learn as much as I could about anything directly related to ocean exploration or ocean science,” Foster says. His motivation would lead him to accepting an internship at Esri, a global market leader in Geographic Information Systems (GIS).

While attending the Esri Ocean, Weather, and Climate GIS Forum, Foster met key leaders of the Ocean Exploration Trust (OET), a nonprofit dedicated to uncovering the mysteries of our oceans. Among many other initiatives, OET has been working in conjunction with the General Bathymetric Chart of the Oceans (GEBCO) to complete Seabed 2030, an ambitious project to create a free, definitive, and publicly available map of the world’s ocean floor by the year 2030.

The project captivated Foster from the moment he learned about it. “We know more about the surface of the Moon and Mars than we do about our own planet,” he says. “There’s more ocean than there is land, and we know very little about the deep ocean.” He applied to embark on a 10-day excursion to map a portion of the ocean floor with OET, and a few months later, his application was accepted.

In October 2021, Foster and 10 other crew members boarded the E/V Nautilus, their home for the journey from Los Angeles, California to Hawaii. Data collection began the moment they started their transit. Operating the ship’s mapping system in pairs, the crew worked in eight-hour shifts, day and night. While one partner constantly adjusted the parameters of the software and hardware to match the layout of the ocean floor, the other processed the collected data. Foster says the crew operated like a well-oiled machine, optimizing the quality of data with as much efficiency as possible, “like working a job in a self-sufficient city scaled down to the size of a ship”.

The map OET is creating, with the help of students and scientists like Foster, is far more than a digital representation of the ocean floor’s physical layout. From documenting sediment changes and tracking tsunami patterns to understanding the changing state of natural fisheries and more, Seabed 2030 will enable nations and conservationists to sustainably and collaboratively manage our ocean’s finite resources on a global level.

The entire experience was non-stop work for Foster and the rest of the crew, but the ever-present power and beauty of the ocean were ample reward.

“On my night shifts, I would take breaks and sit out on the deck and look around. It was wild taking in the fact that I was in the middle of the ocean,” Foster says. “Just being out there, being on the ship, it’s something you feel. Because of the waves, the way the boat moves, the whole atmosphere is different, and you really feel like you are a part of the ocean.” 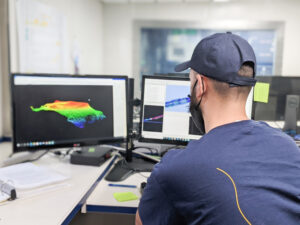 While Foster and the crew were physically isolated on a ship hundreds of miles from land, they were far from alone. Almost constantly, they engaged live with groups of people around the world, offering video conversations from an onboard studio to community organizations, grade-school classes, and others who wanted to learn about their work.

Foster’s journey with OET has now ended, but his mission to expand our understanding of the ocean is just beginning. Now working full-time for Esri, the GIS company where he completed his undergraduate internship, Foster plans on furthering his contribution to the exploration of our world’s oceans. “This experience has given me an actual physical connection to the mapping of the sea floor,” he says. “It’s something I learned about in school, and now I’m a part of it.”